Oct ’16: JUST LIKE HUMANS, FISH NEED SHELTER, AND PLACES TO HUNT AND GATHER AND BREED.

I can recall about 50 years ago, a mate of mine was working for the Ovens River Trust. Most of his time was spent along the Ovens River, as part of a crew that was dragging out all of the trees and logs that had fallen in the river. At the time, most people (including the Trustees of the River Trust) thought they were doing a great job of cleaning out the river.

Just how WRONG we were!! Let us now have some thoughts about current policies on the most important habitat issue. 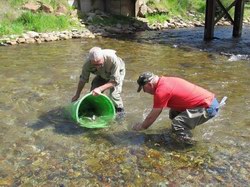 How things change! This day and age Habitat is preached as, and quite rightly so, the most important item in protecting and sustaining our fisheries; whether it be a freshwater, estuarine or saltwater fishery.

At the Fisheries Talk Wild Trout Conference in November 2015, the messages from the keynote speaker, Dr Dan Dauwaltwer, Fisheries Managers and Arthur Rylah Institute Scientists, evolved around the important issues of providing good in-stream habitat and appropriate riparian planting. Dr Dauwalter’s clear principle was that if we “take care of the fish, the fishing will take care of itself”.

The Australian Trout Foundation (ATF) Executive Committee is in full agreement with the findings of the Talk Wild Trout Conference, in that habitat restoration, together with riparian zone and riverbank management, is the best course of action to restore, enhance and sustain our recreational trout fishery.

The ATF’s Mission is: To protect, build and promote Australia’s trout fishery to ensure that all Australians can enjoy trout fishing now, and for future generations to come.

The bushfire of Jan/Feb 2013 burnt large areas of forest from downstream of Harrietville up to and across the Great Divide and into the Gippsland catchments. This was followed in Feb/Mar 2013 by a series of extreme rain events centred particularly over the East branch of the Ovens over a landscape almost denuded of vegetation by the fires.

This resulted in flooding in Harrietville as whole hillsides (trees, rocks, silt, ash and rubble) were washed down the river. The silt and ash loads were far higher than any locals had seen before and resulted in loss of all trout in the area immediately above and below Harrietville.

An electro survey commissioned by Fisheries Victoria and carried out by ARI Officers, around October 2013, found no trout in the main stream above Bright.

The ATF, together with their local ATF delegate, Brian Eddy, got to work and prepared and submitted a detailed proposal for a recovery stocking of the Upper Ovens. The proposal was well supported by angling associations, local Council, tourism and business organisations and Members of Parliament. The application was lodged at the Fisheries 2014 stocking meeting and ultimately resulted in the release of 2,500 advanced yearling brown trout between Porepunkah and Harrietville in Spring 2014.

Brian Eddy, aware that habitat had been destroyed in the floods, felt that we needed to improve conditions in the hope that the released trout could spawn over future seasons.  At the same time the North East Catchment Management Authority (NECMA) and a local community group were completing an extensive streamside riparian revegetation project below Harrietville at “Frosty Corner”.

So he took the opportunity to initiate an in-stream habitat restoration project which would complement the riparian work already in progress at that site.

Brian secured involvement with the Harrietville Community Forum and met with the NECMA Catchment Project Manager, Andrew Briggs to discuss the proposed project and together they plotted how it could be done and costings were calculated. Funding was sought via the Recreational Fishing Grants Program (see Fisheries web site) and this was ultimately approved and a contractor was engaged to carry out the work.

I am delighted to tell you that the project was duly completed and it has made a significant difference to an approx. 1.5k stretch of the river.

I am delighted to tell you that the project was duly completed and it has made a significant difference to an approx. 1.5k stretch of the river. 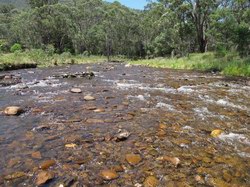 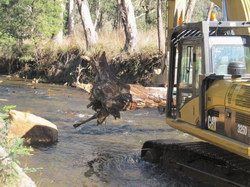 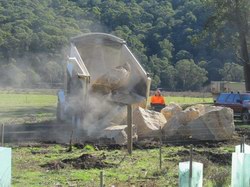 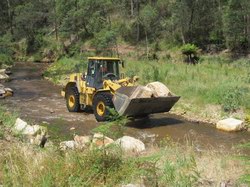 Representing the ATF as an invited speaker, I attended the opening of this Ovens River Fish Habitat Restoration Project on 10th September and upon asking the many attendees, I was pleased to hear that since the bushfire and flood, platypus and native water rats and blackfish, as well as trout, have been sighted in the river.

This project is a shining example of what can be achieved by members of the community and congratulations are due to Brian and Harrietville Community Forum and Andrew Briggs of NECMA, for initiating and completing the successful project, and to Fisheries Victoria, Harrietville Anglers Club, the Upper Ovens Land Care Group and the Australian Trout Foundation for giving their support.

Kiewa River; Habitat and Riparian projects, involving NECMA, Kiewa Valley Angling Club and the local Green Army made up of just about every club in the region.

Delatite River; Habitat enhancement, riparian fencing and revegetation (around 1,140 trees, shrubs and grasses along 870m of stream) GBCMA with assistance from Mansfield & District Flyfishers Club and the ATF in June 2016.

Port Phillip Bay; Restoration of degraded (or lost) Shelf Fish Reefs – initiated by Albert Park Yachting & Angling Club (APYAC) co-operatively with Fisheries Victoria Marine Scientists and supported by the University of Melbourne. I’m a proud member of APYAC, a club that has shown such initiative, although I have not contributed in any way to the project. Funding of $120k provided by the Victorian Government, with a further $150k provided by international group “The Nature Conservancy”. Congratulations and thank you to all involved parties in this first of its type project in Australia.

I have mentioned these examples to show that there are a number of groups actively doing some great habitat and riparian zone restoration projects throughout Victoria, for which we pass on our gratitude and encouragement to keep up the good work.

In summary, there are many organisations and good people doing marvellous work to enhance the health of our waterways and fisheries, and I have only had space to mention but a few in this article.

Notwithstanding the above, a number of our once sparkling and healthy streams are in dire need of similar projects in order to restore them to their former glory and to provide shelter, food and spawning grounds for both trout and native fish and our other water creatures.

Accordingly, our plea to Angling Clubs and Fishers:- Please check your local streams for in-stream habitat conditions and riparian zone plants; where you believe that improvements are warranted, contact the manager of your local CMA or Terry George at Australian Trout Foundation, or Tim Curmi at Native Fish Australia.

There is project funding available via the Recreational Fisheries Grants Program and the ATF and NFA are available to assist in any way, including inspection of proposed habitat and/or riparian project sites and preparation of grant applications.

If you are not already listed as a volunteer, please do so by providing your contact details by email at: habitat@atfonline.com.au or via the form below.